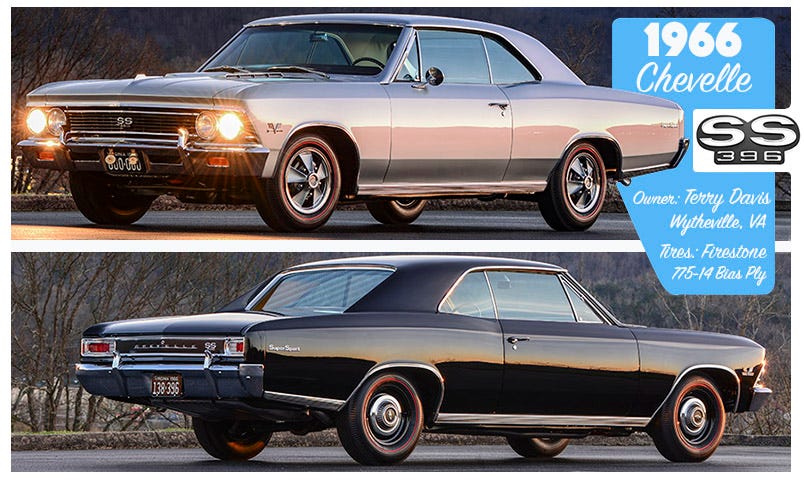 Chevrolet muscle cars experienced a big transition in 1966, with the mainstream introduction of the big block Chevy engine. Of course, the soft intro with the 1965 Chevelle Z16 (201 produced) gave select buyers an opportunity to preview the engine in GM's A-body platform, but the new big block found its way into more than 72,000 Chevelles in the 1966 model year. This combination, regardless of its horsepower package,offered excellent performance and the ultimate cool factor for any car enthusiast. The cars featured here are owned by Terry Davis of Wytheville, Virginia and were restored side-by-side a few years ago. Both cars have similar option packages, but have different backgrounds. Let's take a look at this powerful pair of Chevy muscle cars and find out more of the story.

Terry Davis is a lifelong Chevelle enthusiast who caught the addiction in 1980. He was still several years away from getting his driver’s license, but his father brought home a 1966 Chevelle SS396 and promised it to him, as long as he stayed out of trouble and graduated high school. That car is the immaculately restored Tuxedo Black SS396 here. Not only did it start an obsession with Chevelles, but it also led to Terry’s career in automotive restoration. Terry Davis Restorations specializes in documenting and restoring classic Chevelles. This car was ordered with the L35 engine, a 396/325 hp combination, backed by a four-speed manual transmission. The car features manual steering and manual brakes.

After his father passed away unexpectedly, Terry decided to tear apart his childhood Chevelle and restore it. He already knew the car inside and out, and had documented its history back to the original owner. Terry's research led him to find that the car was built the third week of January at GM's Baltimore plant. It was then delivered and sold at Burroughs-White Chevrolet in Martinsville, Virginia. It entered his family in 1980, and Terry painted it with black lacquer at the age of 15, stripping off another coat of black lacquer that had been applied in the '70s. Terry stripped it all down again for a complete restoration, but was fortunate to retain all of the original sheet metal, as well as the exterior and interior trim.

Terry is a stickler for using original and NOS parts, but didn’t want 50-year-old tires on his freshly restored Chevelle. He used a set of our period correct Firestone Deluxe Champion bias ply tires, which feature a 3/8-inch redline and original 775-14 sizing. Terry restored the original 14x6-inch steel wheels and dog dish center caps to finish off the beautifully simple combination for his priceless 1966 Chevelle SS396.

During the restoration of his black 1966 Chevelle, Terry had another 1966 Chevelle SS396 project, so he performed a side-by-side restoration of the two very similar cars. Both cars are equipped with the 396ci/325hp L35 big block engine, M20 four-speed manual transmission and 3.31:1 gears in the rear end.

This particular example features Chateau Slate paint, and it is restored to the same level of scrutiny as the black one. Terry used all original and NOS parts to restore the car, as he had spent a lifetime collecting original parts from swap meets and junkyards. Part of Terry's desire to restore this car was its unique color combination, and odd similarities to his childhood Chevelle—including the fact that both were radio-delete cars. The ivory imitation leather with black trim offers a clean two-tone look. The woodgrain steering wheel and knee-knocker tach are timeless.

When Terry got this new project home, he sorted through the parts and cleaned out the body to evaluate it. Even though the body and frame had been outdoors, the damage wasn't as bad as he thought. The real fun began when he started running the numbers on the car. He had already confirmed that it was a Super Sport before he bought it, but a deeper dive into the RPO codes revealed a nearly identical option package as his black Chevelle. Even more surprising was the fact that nearly all of the parts that came with the car matched the original build date of the second week of February at General Motors' Atlanta assembly plant. The car was built only two weeks after Terry's black Chevelle. After a bit more digging, Terry found that the rear ends for both cars were cast, assembled, and stamped on the same day. Amazing stuff!

The Chateau Slate car rolled off the showroom floor with optional mag-style wheel covers attached to the 14x6-inch wheels and has a set of our Firestone Deluxe Champion redline bias ply tires, sized at 775-14.

The double rotisserie restoration was taxing, considering that it's hard to make money while working on your own vehicle, but it resulted in an inseparable pair of cars that have racked up numerous awards at AACA meets, Super Chevy Shows, MCACN and many more esteemed events. Both cars received Senior Grand National awards at the AACA Grand National Meet in Auburn, Indiana, a crowning achievement for Terry and his powerful pair of iconic muscle cars.

Potholes, curbs, and road debris are everywhere and inevitably one of those unforeseen road hazards can leave you with a tire in need of repair or replacement. Our Extended Tire Protection plan is a 5 year replacement program for tires that become unserviceable or damaged from a cut, snag, bruise, impact, sidewall damage, or puncture caused by a road hazard. We even do all of this delivery FREE to you.

Look for the ETP Add-On when adding tires to your Shopping Cart.