...but the true meaning of tough is straddling a Pre-1916 Motorcycle and riding coast to coast. That's tough. It's not easy, and at times, it's not very much fun, but the Motorcycle Cannonball is a journey that will go down in the history books as one of the greatest motorcycle endurance runs of all time. Sure, motorcyclists have traveled farther, but when you realize how these machines operate, you quickly understand the challenge at hand. [caption id="attachment_1053" align="alignleft" width="450" caption="The thrash continued well into the morning hours, and most of the riders were able to head out before 9am."] 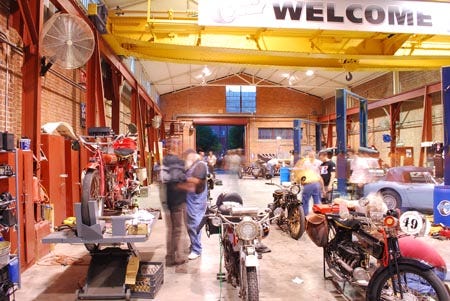 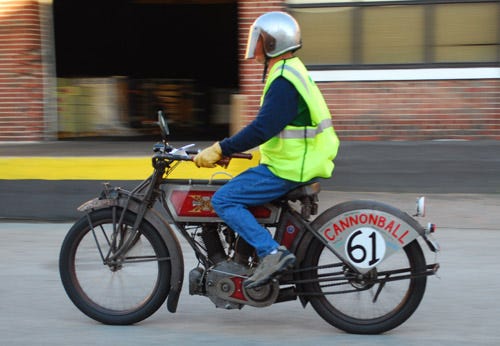 These bikes simply weren't made for this kind of abuse, and the amount of work that goes into each bike is unbelievable. Riders literally thrash all night to get ready for the next day's trip, and battle the roads on the way to each destination. One such destination happened to be right here at Coker Tire, as we're the only choice for authentic tires on Pre-1916 motorcycles. Lots of folks decided to run modern tires on their bikes, but we really take notice when riders keep the authenticity alive with era-correct rubber. 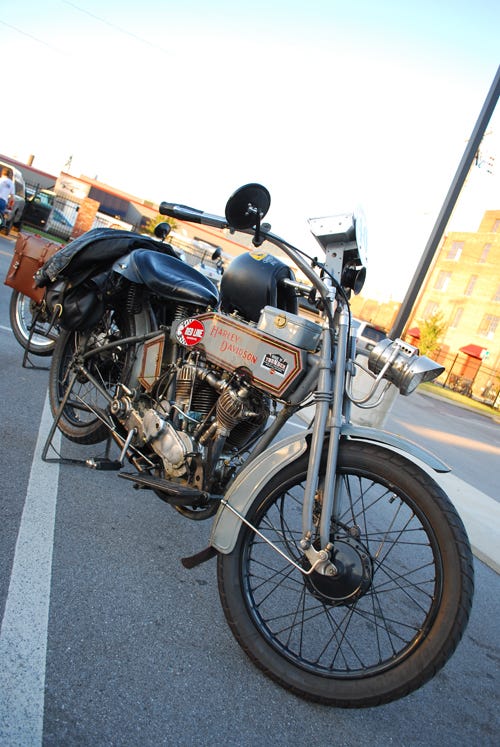 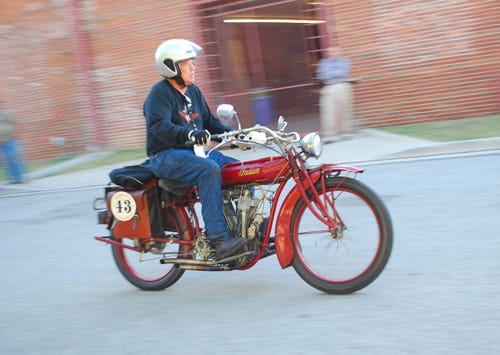 Lots of Harley Davidson and Indian motorcycles were in attendance, but many rare makes and models also competed in the run. Bikes such as Henderson, Pope and Excelsior were also part of the crowd. There was even an immaculately detailed Militaire, as well as a Flying Merkel in attendance. No matter the brand, each bike had seen its share of mechanical misfortune between the starting point in Kitty Hawk, North Carolina and Coker Tire's headquarters, here in Chattanooga, Tennessee. 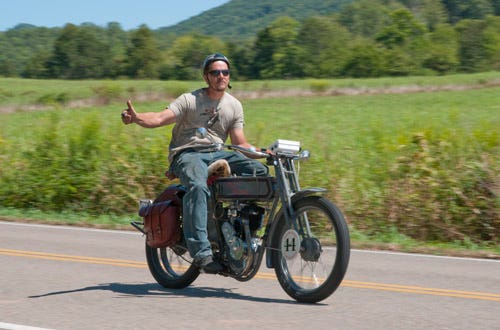 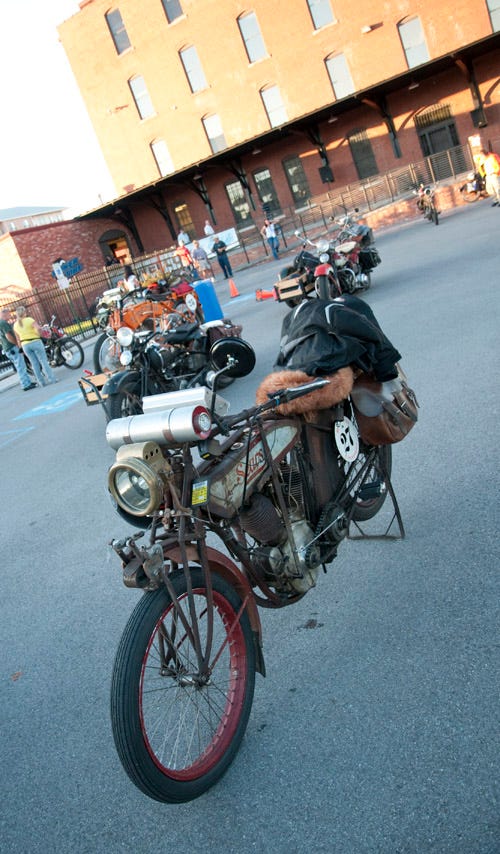 As the riders rolled into Chattanooga, they were greeted by a huge group of fellow motorcyclists. The lobby and museum was open for visitation, and the restoration shop was used as a repair shop for the riders, after they were treated to a scrumptious dinner. The riders thrashed on the bikes well into the morning hours, and finally went to the Staybridge Suites just across the street to catch a few hours of sleep before it was time to do it all over again. Many of the bikes were still torn apart and in need of repair at 7am, but these guys weren't ready to give up. [caption id="attachment_1059" align="alignleft" width="500" caption="It doesn't take long to figure out how serious these guys (and gals) are about completing this endurance run!"] 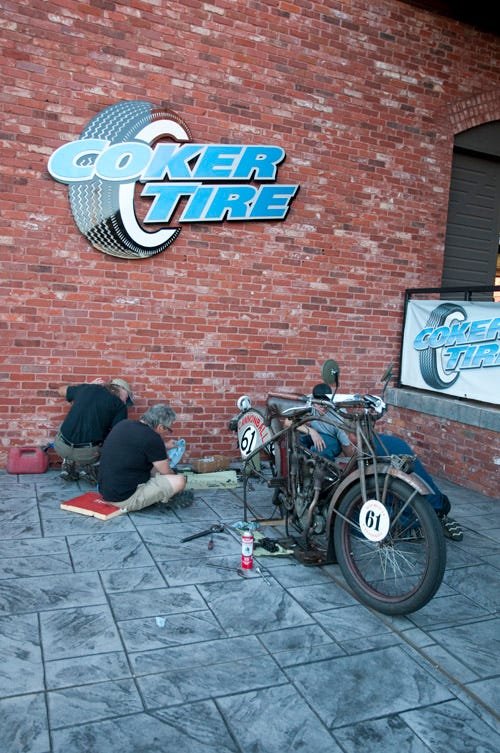 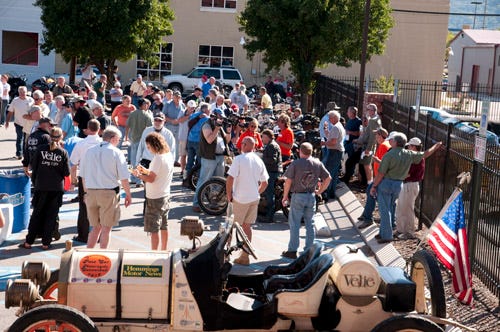 After the single cylinder, single speed bikes rolled away from Corkyville, it was time for the multi-cylinder bikes to hit the road. Good food, cold drinks and a bunch of the nicest (and most determined) riders you'll ever meet made the Coker Tire stop a great time for all. There's no doubt these guys and girls are tough, but the camaraderie between fellow riders is something to be admired. Whether it's help on the side of the road, or pulling an all-nighter in the shop, these riders did what they could to help each other out, and the Honest Charley Garage staff was also available to lend a helping hand. 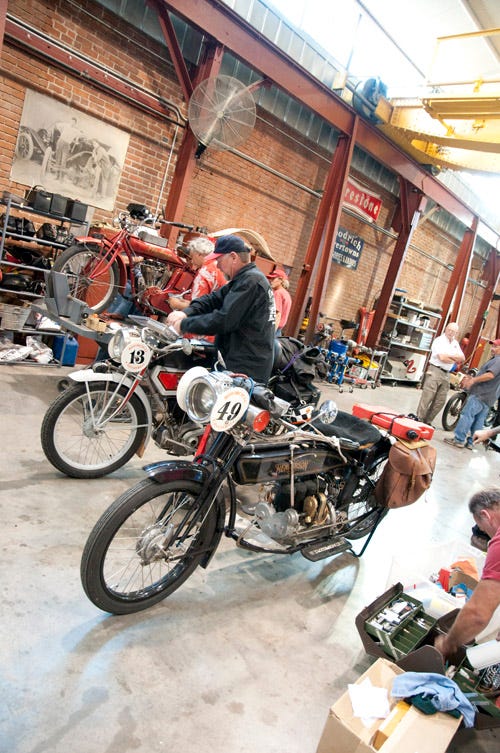 [caption id="attachment_1062" align="alignleft" width="500" caption="Mongo crashed this Harley Shovel Head on his way to Chattanooga, but the guys thrashed on this thing for hours to get it back into running condition."] 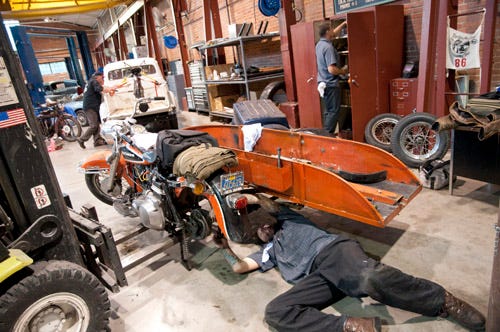 [/caption] From here, the Motorcycle Cannonball heads to Huntsville, Alabama, and then further west toward the destination of Santa Monica, California. We wish them the best of luck on their journey and hope they do it again! Check our Facebook page for LOTS of additional photos!